1704 The first mention of Dog River by Europeans was in 1704 when Pierre Le Moyne, Sieur d’Iberville (founder of French Louisiana) and his crew camped on the banks of Dog River on the night of February 29th while on their way to the original site of Mobile at 27 Mile Bluff. d’Iberville wrote “The land here is good, elevated: the woods are mixed, pines, oaks, laurels, beeches, elms, with meadows. Up this river I am having some stave wood cut by three workmen I have here… This river goes back only 2 leagues inland, where the land looks good.” (McWilliams R. G., 1981) He observed that there was “4 to 5 feet of water” at the mouth of the river. Iberville officially named the estuary Riviere aux Chiens (Dog River in English) on March 26, 1702. No reason was given for the name, however, Andre’ P’enigault in his reminiscences (McWilliams R. G., 1988) notes that another Riviere aux Chiens, located in present day Louisiana, was so named by the French “because a crocodile (alligator) ate up one of their dogs there.” It is interesting to speculate on what might have happened here to cause this name to be chosen but, unfortunately, we will probably never know. At this time d’Iberville’s men had already built a warehouse on the shores of Dog River to aid in transporting supplies from Massacre Island (now Dauphin Island) to Twenty Seven Mile Bluff. The bar at Dog River almost completely blocked the main channel leading up the bay so supplies had to be transferred to a smaller vessel for the last part of the trip. Supplies would be brought to Dog River in a smack (a small sailboat) and then loaded onto a row boat for the rest of the trip up Mobile Bay and up the Mobile River. The exact site of the warehouse was not noted but a site near the mouth of the river seems likely. References: McWilliams, R. G. (1988). Fleur de Lys and Calumet: Being the P’enicault Narrative of French Adventure in Louisiana. Tuscaloosa: Unversity of Alabama Press. McWilliams, R. G. (1981). Iberville’s Gulf Journals. Tuscaloosa: University of Alabama Press. Waselkov, Gregory A. & Gums, Bonnie L. Plantation Archeology at Riviere aux Chiens ca. 1725-1848 University of South Alabama Arcaeological Monograph 7, 2000

Archaeology An archaeological dig at the Dog River bridge site took several years to complete the field work and lab work that included washing and analyzing nearly 200,000 artifacts. The major part of the dig was completed from 1993 to 1996 by archaeologists and students from the Center for Archaeological Studies at the University of South Alabama. The project was required by the Historical Preservation Act of 1966 because construction of the new Dog River bridge destroyed portions of the site. Funding was provided by the Alabama Department of Transportation. A report was published in 2000 describing the wealth of new information about the material culture of the Native Americans, French colonists, and African slaves who lived on Dog River. The plantation was the home of several generations of the Rochon family, who prospered in many economic enterprises during the French (1702-1763) and British (1763-1781) colonial periods. Artifacts, once personal possessions and household items, include Indian pottery, some elaborately decorated, European goods such as glazed ceramics and glass trade beads of all colors, and local products such as bricks made in a kiln at the Dog River plantation. http://www.usouthal.edu/archaeology/dog-river.html

We hope you will join with us in making a difference today. 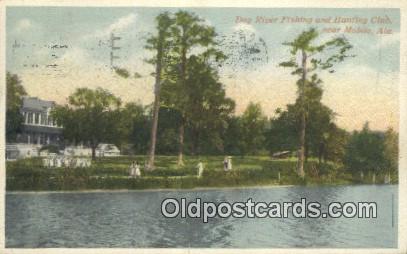